She visited her eye specialist who told her that she was suffering from Age-related Macular Degeneration (AMD). This is a chronic irreversible medical condition that results in loss of central vision because of damage to the macula, or the central part of the retina.


AMD: NOT AN AILMENT TO BE TAKEN LIGHTLY

According to Dr Gemmy Cheung, Senior Consultant, Vitreo- Retinal Service at the Singapore National Eye Centre, AMD is a major cause of blindness in those over age 50. The condition can make it difficult to read or recognise faces, although most of the time some peripheral vision (vision outside the central area of your gaze) remains to allow visualisation of large objects and navigation. However, you might face difficulty in tasks that need good vision, such as driving, reading or even telling the time on your watch.

AMD occurs in ‘dry’ and ‘wet’ forms. In dry AMD - the most common form - the light-sensitive cells in the macula slowly break down, causing gradual blurring of central vision in the affected eye. The exact cause of dry AMD is unknown, but the condition develops as the eye ages. According to some studies, people over the age of 50 who smoke have a higher likelihood of developing AMD. Researchers have also determined that people who are obese or suffer from cardiovascular diseases are also susceptible to AMD, as well as those who have a family history of this condition. In the ‘wet’ form, abnormal blood vessel growth in the eye leads to the leaking of blood and proteins into the sensitive cells (called photoreceptors) in the macula, damaging them and causing vision loss. In contrast to the dry form, the wet form causes rapid and potentially irreversible vision loss, within weeks to months. Although the wet form accounts for up to 10% of all AMD, it is responsible for up to 90% of vision loss caused by AMD, due to its aggressive nature.

If you experience blurred vision or distortion, especially in your central vision, then these could be symptoms of AMD. Other warning signs include slow recovery of visual function after exposure to bright light or inability to tell different levels of brightness, for example, while driving through a changing landscape in the day. 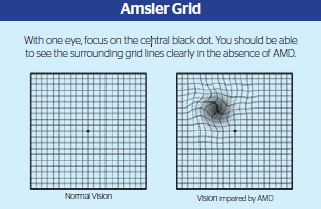 There are currently no proven preventive medications for AMD, says Dr Cheung. Slowing down progression and early detection are the main aims of care during the ‘dry’ stage. If you are a smoker, then AMD is one more reason why you should kick the habit. Eating a balanced diet that includes leafy green vegetables and oily fish, and leading a healthy and active lifestyle also help in preventing AMD. In addition, when outdoors, always protect your eyes from the damaging ultraviolet light by wearing protective sunglasses or hats with wide brims. Regular eye examinations can also determine whether you have AMD or are manifesting early signs of this condition. An early diagnosis improves the success of treatment. Eye specialists use a screening tool called the Amsler grid to help detect subtle changes in your vision. You can monitor your vision regularly by looking at an Amsler grid.

If your eye specialist diagnoses wet AMD, several treatments may be recommended. Injection of medicine in the eye to stop bleeding and reduce swelling is the most common method. Repeated injections are often required before the disease can eventually be stabilised. Other options include laser photocoagulation (hot laser) and photodynamic therapy (cold laser), which uses a non-thermal laser together with an intravenous drug to seal and halt or slow the progression of the condition.